A cornerstone of the City of Chicago’s Green Healthy Neighborhood Plan is the Large Lot Program, which enables purchase of 1 or 2 vacant lots for $1 each to residents who own property on the same block. Two areas on the south and west sides of the city with high rates of land vacancy—Greater Englewood and East Garfield Park—were included in the program’s first wave of lot offerings in spring 2014, and successful applicants received deeds to their new property in late 2014.

The objectives of our research were to collect baseline social and environmental data on properties purchased under the program in these two areas, then track short term changes (2015-2017) and develop procedures for measuring longer term changes (2017 and beyond). The following two research objectives are discussed:  (1) What benefits and costs do large lots have for new owners and nearby neighbors? (2) What physical changes are made to the lots as a result of purchase and how does lot condition and level of care change over time?

The focus groups in Fall 2015 provided valuable insights across all three neighborhoods.  In major finding was that the change in ownership of the lot property had the effect of becoming known around the neighborhood, and in turn, residents began to help out with care for the lot. Prior to ownership, undesirable street activity included public urination, drug activity, prostitution, illegal parking, and dumping. After lot ownership the “dirt began to shift away.”

Large lot owners had a variety of visions to plan for the development of their lot.  They could generally be classified in the following themes.

Several wanted to beautify their block.  An example of beautification is captured by one resident who said they want “….to encourage passer-byers to stop and reflect on their lives, because we all get a peace of mind when seeing a garden”

Others wanted their lot to be used as a neighborhood resource. An example of such a resource was stated by on resident as developing a “community garden to let people grow their own vegetables, fruits, and flowers.”

Growing local foods was a recurrent theme in their visions for their lot.  One resident listed off a number of possibilities such as “urban gardening, that includes fruit trees, vegetable gardens with solar powered irrigation, and an apiary.”

Many residents affirmed their family identity by remaining in the family home and not fleeing to another neighborhood or the suburbs.  Said one resident, “…from the advice of [my now deceased father] I always knew that I could never sell the family home and wanted to make it better.”

Several residents already felt the benefits of owning a large lot.  The impacts of owning a large lot were generally positive.  Even within one year’s time of owning, residents reported some significant changes occurring in their social interaction with neighbors and the street culture of their block. These changes suggested a decrease in crime and a stronger sense of personal security:

A related impact was a block that had become quieter and safer.  As illustrated through the words of one resident “…if people know the lot is vacant then they will do dirt in the lot; ownership helps to make the dirt go away.  [Our neighbors] now have an obligation to take action.”

Some residents felt as if their large lot allowed them to take ownership of their neighborhood.  In their words, they stated “a large lot is a great investment.  It allows us to tell our own story and it is a story so unlike the ones being told about Englewood.  This is about history making for Englewood, and it’s time for us to take ownership of our community.”

Some residents reported a general change in morality occurring on their block.  “There’s becoming a transformation where morality has changed, and kids need to see change in order for them to change.”

A recurrent explanation for the greater sense of personal security and decreased crime was the influence of lot ownership on increased neighborhood social interaction.  As mentioned by one participant, a driving force of impacts was due to neighbors engaging with one another, reacquainting themselves with one another, and building a sense of cohesion. The participant went on to characterize the neighborhood cultural shift stemming from caring for a large lot and having a visual presence outside:

“What a powerful difference the lot has made on the block.  It’s about beautification where people know that good things are possible. We’re not just bottom-feeders who live here.  [These gardens that were once vacant lots] change culture. The mother who has a picnic in the garden is overjoyed. It’s become theirs and they treat it like it’s theirs.  People look out for one another now.”

Although the long-term sustainability of these positive benefits is still open, participants in the focus groups felt a privilege in ownership of a large lot.  They were grateful to the City for developing such a policy, and felt it upgraded street life on their block. 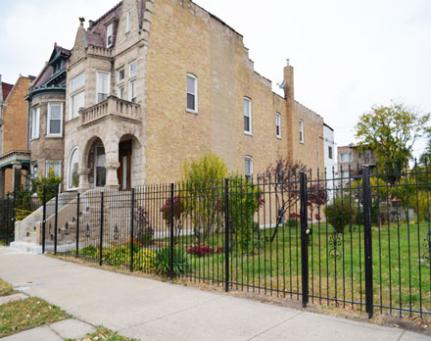 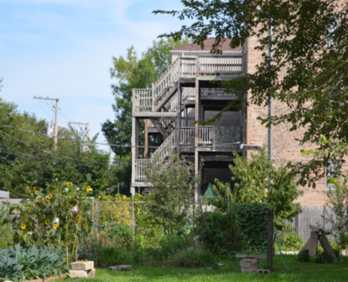 The results of the survey of large lot owners during Summer 2016 converged with those of the environmental assessment and from the focus groups.  The survey was mailed to the 296 owners of large lots in the inaugural offering in East Garfield Park, Englewood, and Woodlawn.  After accounting for incorrect addresses, we had a net of 278 large lot owners of which 71% (or 197 owners) returned their completed questionnaire.  This response rate is considered extraordinarily high given that survey methods usually receive a response rate of 35% or lower.  The high response rate is attributed to partnering with the City’s Department of Planning and Development who provided an introductory letter to our survey in an initial mailing, and who also conducted telephone follow-ups with persistent non-respondents at the time of the third mailing and encouraged them to respond. The survey was conducted in the middle of the second summer of ownership of the lot (i.e., purchased lot in Spring 2014, completed questionnaire mid-Summer 2016).

The socio-demographic characteristics of large lot owners in the first-wave of the program provided a representation of the impacts of this policy.  There was an open-ended question that asked respondents to self-identify what they considered themselves:  74% indicated being African American, 16% White, and 7% Hispanic.  Finally, 59% report being female, and 41% male; with 38% reporting having children living in their home.

Owners want to improve the appeal of their neighborhood and enhance their familiarity and friendships with others on their block.  Most new owners were enthusiastic about making their lots more attractive through planting gardens for vegetables, flowers, and ornamental shrubs, and keep the lots well-maintained.  Not only were they indicating their intentions for lot beautification, they also reported on their behaivor for doing so, such as mowing, cleaning up, filling in holes, and removing vegetation.  Other items required more extensive work such as putting in raised beds for plants, installing fencing, and creating a parking space.  Lot ownership clearly encouraged residents to be outside “working” to improve and beautify their property.

Private property in the City requires owners to comply with codes by maintaining the lawn and shrubs.  In addition, the lot required fencing if they were not adjacent to one’s home.  Of the newly acquired lots, 84% of large lots were periodically mowed (turf-compliance); and 43% of non-side lots were fenced (69% overall fence-compliance).

Across the two years of study, 40% of large lot owners made changes in the first season.  These changes included cleaning-up trash and refuse, installing fences, infill of subsidence, hardscape removal, turf improvements, planting (flowers, vegetables, trees, and shrubs), putting-up signage, ornamentation, development of social/recreational facilities, and vehicle storage or parking. Findings indicate that while there has been substantial progress during the first season of ownership, current lot condition can only partly be attributable to the Large Lot Program. Informal contact with owners during the field calibration confirms that substantial work was done prior to official ownership.  In fact, some residents had been taking care of their lot for more than 20 years prior to their purchase of it.  These findings indicate that the Large Lot Program advances the level of care, providing owners the incentive to go beyond basic management.

With many urban areas investing resources into revitalization of facilities and programs, overlooked policies may be premised on encouraging residents to take ownership. If such policies are implemented, cities would divest themselves from being a “land bank.” Given the results of their study, the City of Chicago has developed an effective policy to divest itself from being a land bank, and instill a stronger sense of community through its Large Lot Program. 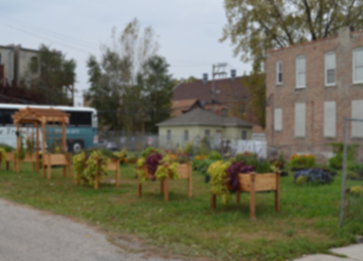